Probably no one in Northern California has done more for the renaissance and resurrection of old vine Zinfandel than Larry Turley. He started Turley Cellars aft… (Please read more in the Notes.)

Probably no one in Northern California has done more for the renaissance and resurrection of old vine Zinfandel than Larry Turley. He started Turley Cellars after selling most of his interest in Frog’s Leap Winery to his original partner, John Williams. The Turley Cellars project was founded in 1993, and is now over 20 years of age. The great thing about Larry Turley is that he’s quick to admit he’s never met an old vine he’s not fond of. As a result, they farm and buy fruit from 35 different vineyards, with some of them dating back to the late 1800s, long before Prohibition. There are at least 30-plus separate wines, and some super-talented winemakers have worked for Turley – first Ehren Jordan and more recently Tegan Passalacqua. I have praised these wines from the beginning and, to my surprise, older vintages of 10 to 15 years – much older than I generally recommend drinking Zinfandel – have aged remarkably well. While Turley’s Petite Syrahs are probably 50-year wines, most of the Zinfandels are best drunk for their exuberant and robust fruit and personality in their first 8-10 years of life.

Purchased from the winery on release, shipped directly to professional storage and never touched until now. 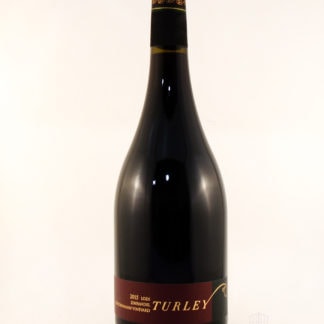