Raised for 16 months in French oak and inspired by the family’s respect for Bordeaux, the 2009 Torre Muga has … (See Notes) – This exciting collection is from the Estate of Arnold Steinberg of the Steinberg grocery chain in Quebec. Mr. … (See Provenance)

Raised for 16 months in French oak and inspired by the family’s respect for Bordeaux, the 2009 Torre Muga has a very primal bouquet with creme de cassis, black currant and vanilla with fine delineation, although it is very tight at the moment. The palate is full-bodied with grippy, bold, assertive tannins and layers of dense black, mocha-tinged fruit with hints of white pepper. It has great power and volume without compromising balance, although it requires several years in bottle. Drink 2018-2035. Bodegas Muga was a must during my afternoon visiting the triumvirate of classic Rioja producers located within spitting distance from each other in Haro. The name should need no introduction. It was founded by Aurora Cano and her husband Isaac in 1932, although the family were growers and did not commence winemaking themselves until the 1960s, when they relocated to the building in Barrio de la Estacion. Under Aurora’s son, Isaac Jnr, who joined us for the tasting, Muga fostered a reputation for high quality, classic Rioja wine sourced from an almost incalculable number of tiny parcels. During the 1990s they branched out to pursue what you might call “modern” Rioja with the inception of “Torre Muga” in 1991. This move may have piqued those that feared Muga was forsaking their classical roots, though those fears were unfounded and the bodega continues to fashion wines that embrace both styles. However, let us commence with their sparkling contribution to the Rioja landscape.

This exciting collection is from the Estate of Arnold Steinberg of the Steinberg grocery chain in Quebec. Mr. Steinberg was a prolific collector and also a Commandeur de Bordeaux and member of the Confrerie des Chevalier du Tastevin. The cellar was personally inspected twice before reaching an agreement and we can confirm that the bottles had been acquired on release (save for the few before 1959) by Mr. Steinberg and held in his cellar at 55C. In this first tranche we showcase all the wines that have a base neck fill and above, in other words, in perfect condition. There of course is some bin staining but that should be expected with wines that have been properly stored for over 50 years. 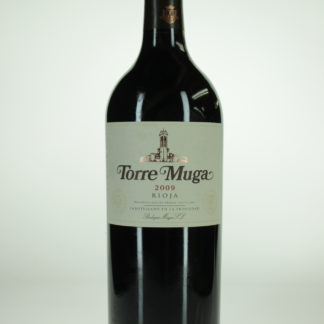