Two terrific efforts from this vintage, the 2003 Cos d’Estournel (70% Cabernet Sauvignon, 27% Merlot and the rest Petit Verdot and Cabernet Franc) remains one of the superstars of the vintage. It offers an opaque ruby/purple hue as well as notes of incense, camphor, licorice, creme de cassis and graphite. Full-bodied, opulent, incredibly fresh and well-delineated, it can be consumed now and over the next decade. Kudos to the team at Cos d’Estournel.

This collection comes to us from Montreal where it has been meticulously built up since about 2003 when the couple decided to start collecting wine.Ê The purchases occurred primarily from the LCBO (Ontario government store) and the SAQ (Quebec government store) on release whenever possible.Ê It was always intended to purchase the best wines possible and the inventory will show that commitment.Ê The cellar itself had proper cooling and humidification systems and was indeed a showpiece in the home.Ê A family situation has caused it to come to us for sale 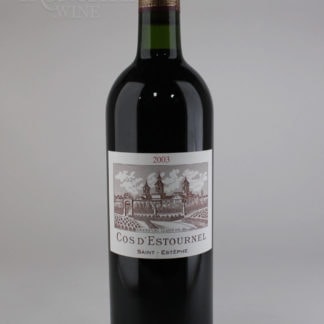