CLICK HERE to learn the provenance and other wines from this collection. 1995 Trotanoy – Certainly the best Trotanoy between 1998 and 1982, the 1995 has a deep saturated ruby color that is dark to th… (See Notes) – This collection is a small part of a 10,000+ bottle cellar that has been meticulously kept at perfect temperat… (See Provenance)

Certainly the best Trotanoy between 1998 and 1982, the 1995 has a deep saturated ruby color that is dark to the rim. Relatively shut down when tasted in 2002 on several occasions, the wine, with coaxing, does offer some notes of earth, raspberry, black cherries, and a hint of licorice. Medium to full-bodied, powerful, and backward, it is an impressively constituted Trotanoy that is relatively large-scaled but the huge level of tannin also means it might be a modern-day version of the 1970. Time will tell. Anticipated maturity: 2010-2025. Last tasted, 2/19

This collection is a small part of a 10,000+ bottle cellar that has been meticulously kept at perfect temperature and humidity. Iron Gate has personally known this client for 10 years and even assisted in originally setting up this cellar when it was originally built by one of the top wine cellar designers in Toronto. Inventory was managed with an eSommelier system and to say that ultimate, almost obsessive care was taken in storing these wines would be un understatement. The collector himself is well connected in the wine world and always purchased from top producers and/or futures. The sale is a result of a migration to Burgundy in his drinking habits. 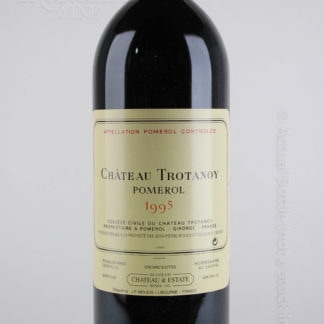