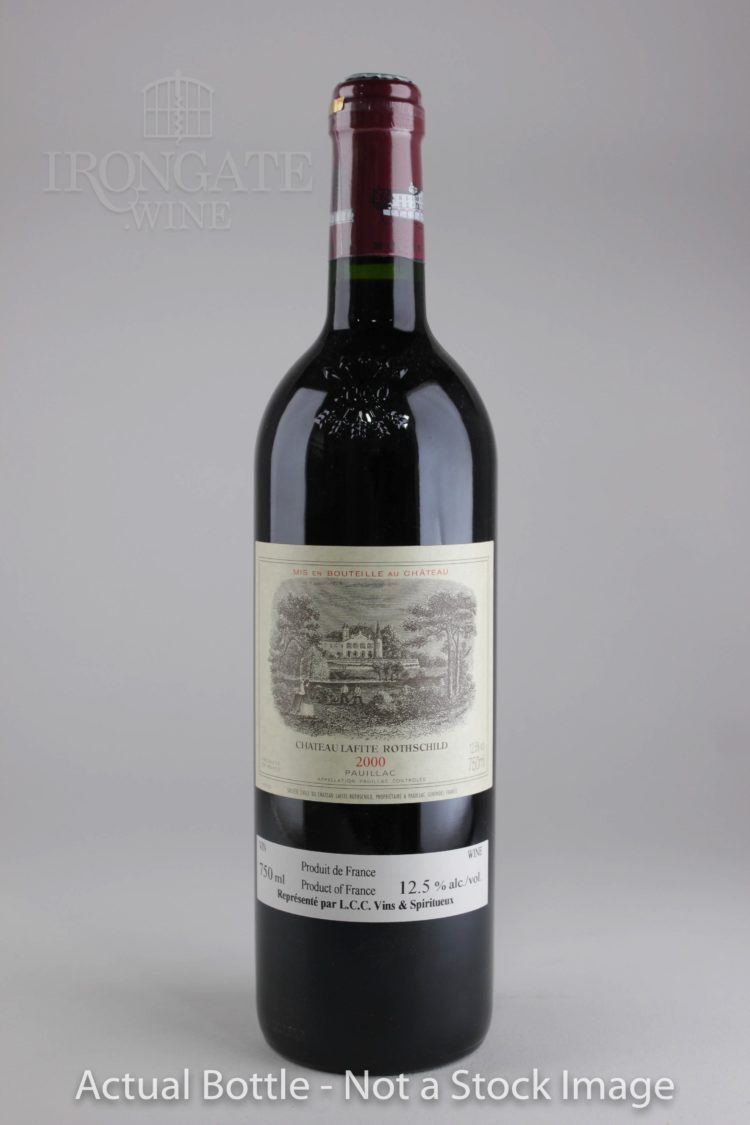 French soldier and diplomat Maréchal de Richelieu likened the wine of Château Lafite to “the ambrosia of the Gods of Olympus.” If that isn’t enough to compel you to try a bottle, read on.

Today, we’re sharing why the decadent and indulgent Château Lafite Rothschild is one of the finest wines in our collection. Rich-bodied yet delicate, this is one you’ll reach for on every special occasion, or when you just want to add a little elegance to the everyday.

Let’s take a look at why it’s such a prized choice.

Most bottles of Château Lafite Rothschild consist of the following grape varieties and concentrations:

A Dedication to the Craft of wine making

One of the elements that sets Château Lafite apart from the rest is the dedication and admiration expressed by the staff members who operate the vineyard.  According to the notes recorded at the time of bottling, the year 2000 was a temperamental one climate-wise. This was especially the case in southwestern France near the city of Pauillac, France where the vineyard is located. This is part of the Médoc region on Bordeaux’s Left Bank.

Here, the growing season began relatively early and the region experienced above-average temperatures, along with normal rainfall. In early May and June, rainfall was more plentiful than usual. As such, the technicians at Château Lafite had to work even more diligently to protect the quality of the vines.

As early summer transitioned into the long, late summer days of August and September, the rainfall lessened. In its place, the hot sun created beautiful days and juicy, ripe grapes. It was this fruit that went into the bottle of 2000 Château Lafite Rothschild you’re eyeing.

Notes on Its Divine Taste

There’s a reason that bottles of this wine sell for thousands at auctions. In fact, at a recent Hart Davis Hart auction, one bottle of 2000 Château Lafite Rothschild was listed for $1,700. We also have a bottle of ultra-rate, pre-phylloxera bottle of vintage 1869 Lafite Rothschild available, noted as the first vintage produced under the ownership of Baron James de Rothschild.

Superior quality begets a price tag indicative of such refinement.

When you pick up a bottle for yourself, it doesn’t take long to realize why this is the case. As soon as you pour a glass of Château Lafite Rothschild, the first thing you notice is its distinct dark color with delicate, gorgeous hints of purple throughout.

The Pauillac region is especially revered for the aromatics that its wines produce. In addition to Château Lafite, other first-growth estates in this area include Latour and Mouton Rothschild. Of these, Château Lafite Rothschild is often considered the best Bordeaux wine in the appellation.

Drawn in by the aroma alone, you’ll understand why as soon as you get close to your glass. Without taking a sip, you can identify notes of cassis, graphite, truffle, dark berries, cedarwood, spice, and tobacco. Then, the flavor is a treat to savor. All at once dynamite, full-bodied and rich in texture, it’s also incredibly ripe, with polished tannins that add a touch of softness.

Are you preparing to open a young vintage bottle of Château Lafite Rothschild wine? If so, you can decant it for an average of three to six hours to allow the wine to soften and open its aromas.

On the other hand, older vintages might not require as long of a decanting period. You’ll only need to decant them enough to remove any sediment present. Most Château Lafite Rothschild wines reach their peak taste after they’ve been aged at least 15 years after the first bottling.

Aim to serve the bottle at 15.5 degrees Celsius or 60 degrees Fahrenheit. This cellar-like temperature lifts the wine’s flavor and enhances its freshness.

Foods to Pair with Your Wine

While you’ll certainly enjoy pouring a glass of 2000 Château Lafite Rothschild and partaking in it alone, it also pairs exceptionally well with many dishes.

For a meal that impresses, look to serve this wine with classic meat dishes such as veal, beef, pork, duck, lamb, game, or roast chicken. It will also make a delicious complement to any other roasted, braised or grilled dish.

In addition, this wine also shines when paired with flavorful Asian dishes or seafood courses such as tuna and salmon. Add a side of mushrooms or toss with fresh pasta for an experience your dinner guests will talk about for years.

Indulge in a Bottle of Château Lafite Rothschild

When you want to treat yourself and your guests to an experience unlike any other, it’s wise to reach for a bottle of wine from Château Lafite Rothschild. Grown in a region recognized worldwide for its ideal growing climate and excellent grapes, this is a product that delivers the experience that fine diners crave.

We could wax poetic about this gem of a wine for pages, but we’d rather you taste it for yourself.

Shop our extensive online inventory of fine wines and send some to your doorstep in seconds. Might we suggest one of these spectacular bottles of Lafite Rothschild? You can’t go wrong when you choose a bottle with this label. Centuries of dedication to the craft of winemaking have resulted in top-tier wines that delight every palette.

Become a member today to receive notifications on the arrival and availability of your favorite wine!